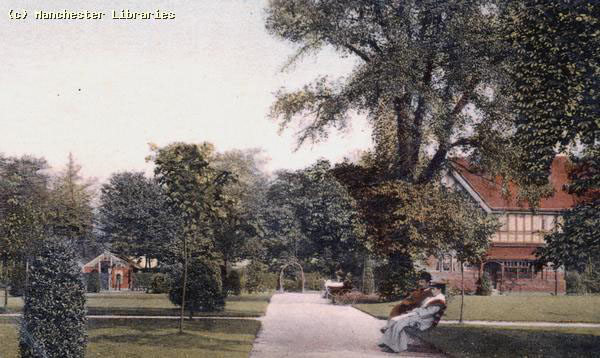 Marie Louise Gardens has been enjoyed by the local community for over a hundred years as a sanctuary from the ever-increasing hustle and bustle that surrounds it. Tucked away behind one of the busiest roads in South Manchester, it is a place of peace and quiet for all of us to enjoy.

The Silkenstadt family originated from Bremen in Germany. Johann Georg Silkenstadt moved to Manchester around 1865 and became a very wealthy cotton merchant. He married Josephine Helene Genth from Huddersfield and they lived at Rose Bank in West Didsbury which he had built in 1872. The Silkenstadts only had one child, a daughter they named Marie Louise, who was born on 26th March 1865.

Marie Louise was married in 1888 to William Murray Caldwell Greaves Bagshawe at St James Church in Rusholme. The Bagshawes were a renowned family who lived at Ford Hall in Chapel en le Frith, Derbyshire. The new Mr and Mrs Bagshawe lived in Greystoke Hall which Mr Silkenstadt had built for them as a wedding present. Rose Bank and Greystoke Hall were both on the same site, and some years ago, when Manchester University bought both the properties to use as student halls of residence, both buildings became known as Greystoke.

William Bagshawe, Marie Louise’s husband, had a very mysterious death in 1901. He had served in the Boer War, and after being injured and suffering concussion, he was sent home to recuperate. A year later, he decided to go on a cruise, and whilst at sea, he disappeared, leaving all of his luggage on the steam cruiser which was anchored off the coast of Madagascar. His body was never found, even though his family offered a reward for information as to the circumstances of his disappearance.

Broken-hearted, Mrs Silkenstadt decided to do something in memory of her daughter and bought a piece of land along Palatine Road. The land was purchased from three vendors, Thomas Gair Ashton, Edward Tootal Broadhurst and Edward Donner at a cost of £5,250.

The design of the Lodge and the Gardens was undertaken by Joshua Cartwright, a very well respected civil engineer in Manchester, who was also responsible for the Arts and Crafts Centre, Broad Street, Bury (formerly the Bury Technical College), which is now a Grade II listed building.

The total cost of the land and building works was approximately £15,000, equivalent in today’s money to £1.37 million; Mrs Silkenstadt’s gift was, by any standards, a very generous one.

Initially, there were 72 different types of tree planted in the Gardens which boasted many species not seen before.

The Gardens were entrusted to Withington Urban District Council, and the official opening ceremony took place at the entrance on Dene Road on 13th June 1903. They were a great success with local people, and the Council employed a Mr Coulson to tend them and manage their upkeep; he was the first resident park warden and the first occupant of the graceful Lodge. He was paid a weekly wage of 25 shillings, a handsome amount in 1903.

Mr Coulson took great pride in looking after the Gardens and was given two days off every month. He was the first custodian of Marie Louise Gardens, and now that their future has been secured by Manchester City Council, we feel confident that they will be restored to reflect their former glory.

For anyone who wishes to research further into the Marie Louise Gardens archives, here are two links to copies of the Primary Indenture and original Covenant drawn up when the land for the gardens was originally bequeathed by Josephine Silkenstadt.

The Friends of Marie Louise Gardens3 days ago
Saturday was warm and sunny - ideal weather for our tidy-up. As well as removing a lot of deadwood, we swept the entrances, did some strimming, weeding and planting, and revarnished the last of the benches. Unfortunately, our trusty lawnmower finally gave up the ghost, so we weren't able to cut the grass in the sundial area - hopefully, we'll have a new one in a week or two. All in all, however, a very productive and enjoyable morning.

Our maintenance team will be meeting again this coming Saturday, 14th May, to give Marie Louise some more TLC. Summer is fast approaching, so, as well as carrying out the usual tasks, we'll be freshening up the mulch around young shrubs and saplings, to prepare them for all those hotter, drier days ahead. The weather forecast for Saturday is very promising, so we can look forward to an enjoyable morning. If you're free for an hour or two, do join us outside the shelter at 11am - we'd love to have you along!